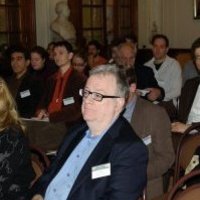 The Royal Inscriptions of Mesopotamia volumes:

FRAYNE, Douglas Ralph On December 19, 2017, Doug passed away suddenly, at home, aged 66 years. Doug is survived by his sisters June Anne Frayne and Jeanne (Pete) Hill and was predeceased by his parents Ralph and Beulah (Honsberger) Frayne. In 1981, Doug was awarded his PhD in Near Eastern Languages and Literatures from Yale University. Since 1980 he worked as a Professor for the University of Toronto's Department of Near and Middle Eastern Civilizations, until 2006 as Researcher and Editor on the Royal Inscriptions of Mesopotamia Project and subsequently on a number of research projects. He was a passionate teacher and held positions with the Oriental Club of Toronto and the Canadian Society for Mesopotamian Studies. He will be fondly remembered by family, friends, students and colleagues. A memorial service will be held on Friday, January 19th at 12:30 p.m. at Bloor Street United Church, 300 Bloor Street West, Toronto. Memorial donations in memory of Doug may be made to The MS Society of Canada, 1-800-268-7582. https://mssociety.ca/