The archives excavated in the houses of Kaneš lower town belong mainly to Assyrian merchants settled there for business purposes during the 19th and 18th centuries BCE. This documentation is mostly concerned with business matters and contains relatively few contracts pertaining to family law, including marriage contracts.

Most of the marriages contracted between Assyrians must have taken place at Aššur, where one may suppose that the contracts were kept. Marriage contracts discovered at Kaneš involve marriages between Assyrians, or between Assyrians and Anatolians. They reflect atypical circumstances or contain special clauses: they provide for financial arrangements in case of divorce or stipulate steps to be taken in case of no offspring. Thus, marriage did not regularly entail drawing up a written document, but only agreements providing for specific terms were set down on tablets.

The archives of Kaneš have yielded about forty marriage contracts or legal documents concerned with divorce, as well as about ten other legal records touching on these subjects. The majority of the texts date to the 19th century BCE, as well as a handful of later documents (18th century BCE).

The written agreement was made between the father or the parents of the young woman and the young man, or sometimes the family of the latter. According to the terminology, the girl was given (tadānum) in marriage by her family, or in some cases, the man took her (ahāzum) as wife. The exchange of gifts is usually not mentioned in the contracts. The bride gift paid by the groom to his in-laws was called šīmum, ‘price’; it was paid over at the occasion of the wedding. The husband could also make a gift to his wife (iddinū). Some marriage contracts include a penalty in case of divorce. 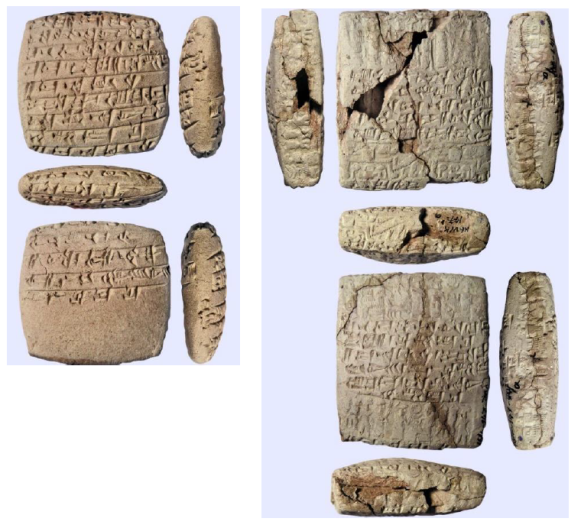 A specific arrangement for Assyrian merchants

Marriage was normally monogamous in the ancient Near East. However, for couples that remained childless, only infertility in the woman was envisaged: thus Assyrians could take a second woman in order to produce children.

A specific arrangement for the Assyrian merchants who were absent from Aššur for long periods, permitted them to take a second wife in Anatolia. This second marriage was possible only by observing two fundamental rules: an Assyrian merchant could not have two wives of the same status (aššutum, main wife, amtum, secondary wife) and he could not have two wives in the same place (Aššur, Anatolia). Both Assyrian and Anatolian women could be aššutum or amtum and letters seem to give the same rights to both wives. The merchant could never live with his both wives simultaneously.  These peculiar circumstances obliged married women to run their households alone during certain periods of their lives. The Assyrian wife lived at Aššur and remained there, together with her younger children, during her husband’s career in Anatolia, whereas the Anatolian wife lived with her husband but found herself alone when he retired and moved back to Aššur.

The marriage with Suhkana takes place in Anatolia, but the groom is already bound by a marriage promise to the daughter of Dada in Aššur. Ultimately, he will have two wives. He is forbidded to marry another woman in Anatolia.

Michel C. To appear. Women from Aššur and Kaniš according to the private archives of the Assyrian merchants at beginning of the IInd millennium B.C., Writings from the Ancient World, SBL, Baltimore