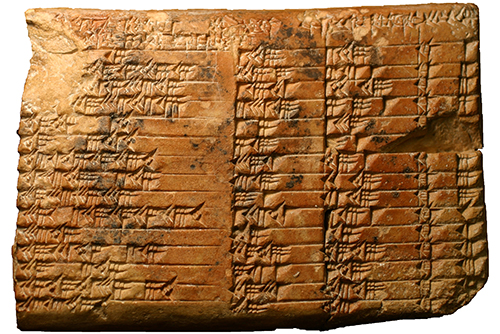 Tablet Plimpton 322 is one of the best known mathematical cuneiform texts. This text inspired a lot of publications, especially by mathematicians and computer scientists who were fascinated by the idea that a general method for generating "Pythagorean triples" was invented more than thousand years before Pythagoras. The text became a kind of archetype of cuneiform mathematics, despite the fact that this document is completely atypical.

The archaeological context of the tablet is unknown, but epigraphic evidence show that the tablet dates to the Old-Babylonian period. The tablet is oriented in landscape format. The left part, representing about a third of the original tablet, is lost. The obverse contains a table of fifteen rows and four columns with headings, and the reverse contains only the continuation of the vertical lines drawn on the obverse. The cells of the table contain large numbers written in sexagesimal place value notation. The heading of the first preserved column indicates that the numbers of this columns are “the square of the diagonal from which 1 is subtracted and that of the width comes up”, which evokes clearly what we call today the "Pythagorean theorem".

The interpretation of Plimpton 322 was, and remains, quite controversial. Were the fifteen preserved "Pythagorean triples" generated by a systematic algorithm, or were they obtained by chance? Was the table intended to provide data for teaching, or to exhibit the complete set of solutions of a mathematical problem? What did the lost columns contain? Was the table intended to continue on the reverse, and if it is the case, what was the content of this possible extended table? In the bibliography below, which is a small part of the literature devoted to the tablet, opposite answers to these questions can be found.