During the Ur III period the city of Umma (modern Tell Djoha) was the capital of the Umma province. Umma has never been scientifically excavated, but it was extensively plundered during the first quarter of the 20th century. The identification of Tell Djoha with Umma was determined on the basis of a few surface finds made at the same time. During the remaining part of the 20th century Tell Djoha was apparently covered by sand dunes, preventing any excavations. Recently Umma has again been exposed to looters and extensive damage has been reported. Umma is clearly visible in Google Earth (31°40'2.75"N 45°53'15.63"E). Architectural structures presumably exposed during the recent excavations (under the direction of Donny George?) are also visible. Approximately 20,000 Ur III tablets from Umma have been published; another 4,000 avaiting publication have been catalogued by the CDLI. The total number of Umma tablets in museums and private collections around the world is unknown. During the Ur III period, the Umma Province was governed by the members of one family. In the literature this family is either referred to as the Ruling Family of Ur III Umma, or the Family of Girizal/GIRI.NI. The ancestor of the family, GIRI.NI, is only attested through the seal-inscriptions of his sons, and he remains an almost mythical figure. Due to the scarcity of sources relating to the earliest years of Ur III hegemony over Umma it is difficult to estimate the role of the ruling family during those formative years. However, it is likely that the members of this family were appointed their offices in Shulgi's 33th year. During the remaining almost 40 years of Ur III rule, the governor's office, as well as a majority of the remaining important offices in the Umma administration were in the hands of the same family. The well-known governors of Umma are:

All three governors were brothers. Their father, Ur-Nigar, held the title Chief Cattle Administrator (šuš3), a title he inherited from his father, and which in turn was passed on from Ur-Nigar to a son by the name Ur-E'e. Ur-E'e almost never used the title Chief Cattle Administrator himself, but it was included in the seal inscriptions of his sons Lu-kala and Lu-Haya. It is likely that Lu-Haya inherited his father's office although he is not attested with the title šuš3. 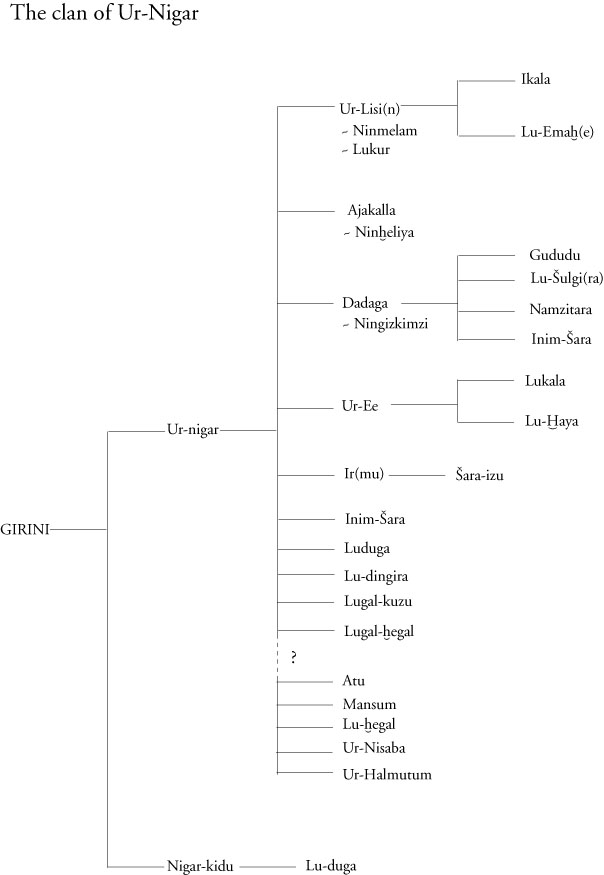