The most commonly recorded observations of the Seleucid Period concerned the moon, such as its position, size, and phase - especially the appearances of the new moon and full moon (during which we say the moon and sun are in conjunction and opposition, respectively). These sightings determined the lengths of the months. In addition, several other statistics were measured such as the velocity, longitude, and latitude of the moon at time of syzygy, and the length of daylight on that day. Such data was used to predict solar and lunar eclipses whose occurrence held deep significance in ancient Mesopotamian cultures.

At some point the Babylonians realized that the velocity of the sun along the ecliptic was not constant, but rather varied depending on its position. This perhaps was noticed due to the inequality in transition times between the two equinoxes (see Neugebauer pg. 56). The reason for this variation is that the earth's orbit around the sun is not perfectly circular, but rather elliptical. Thus when the earth is on the arc between the equinoctal points that lies closer to the sun, from a terrestrial perspective the sun moves faster.

To account for this variability the Babylonians used two schemes, evident implicitly in the calculated figures of the ephemerides tables and explicitly in the small number of procedure texts. Neugebauer names these schemes System A and System B.

Layout of a tablet

By way of illustration, the contents of ACT 5 will be explained column by column. The labels of the columns follow Neugebauer's notation. 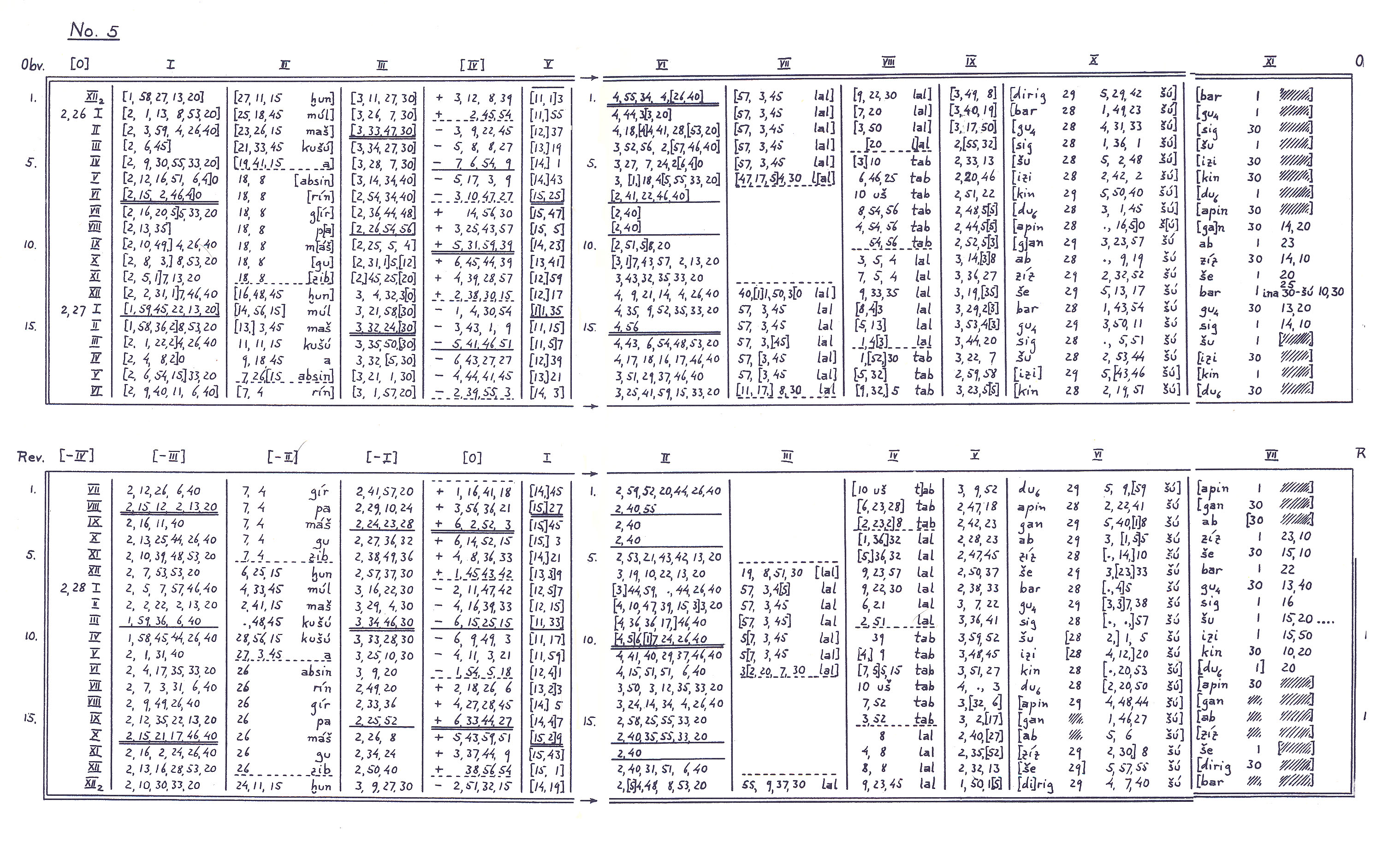 The first column on the left side of the obverse gives the year and the months within, each one of which records a syzygy. Neugebauer calls this Column T. Here the records begin with year 146 of the Seleucid period, which began in 311 BC. Thus the year is 166 BC. The first month is Nisan, or April. Note the addition of an intercalary month at the end of 164 BC, in Rev. 19.

This column records the longitude of the moon at the time of the new moon, measured relative to the ecliptic. These values are calculated sequentially based on the measurement of an initial value. The numbers on the left hand side are the degrees within the zodiac sign on the right.

Neugebauer has drawn up the table so that the two periods of the year with different velocities of the sun are separated by dashed lines. At a new moon the longitude of the moon at syzygy equals the longitude of the sun when it sets on the horizon. Thus the values of column III, which record the progress of the moon through the zodiac, also measure the movement of the sun. For example in obv. 6-12 the difference in successive entries is one whole zodiac sign, i.e. 30 degrees. In the next interval obv. 13-18 the differences of successive entries is 28;7,30 degrees. The change between the two months at the boundaries is an interpolated value between the two velocities.

The entries for this column were calculated based on a trigonometric formula dependent on the latitude of the observer and the part of the ecliptic that the sun is in at that time, i.e. the time of the year. Rather than measuring their latitude directly, however, the Babylonians, used the ratio between the length of the longest day of the year (at the summer solstice) to that of the shortest day (at the winter solstice), which is a parameter giving the same information as latitude. At Babylon the ratio was approximated by 3:2.

For the increments in daylight based on the sun's position λ along the ecliptic, calculations were made starting from 10 degrees into the sign of Aries (or hun is Sumerian) whose beginning point marks the vernal equinox where the daylight equals 12 hours, and from then on in increments of 30 degrees.

This column gives the latitude of the moon (more specifically its center) relative to the ecliptic, at the time of observation. It is measured in barleycorns (sze). For example, in obv. 1, the value is 3,12;8,39, or (3x60+12+8/60+39/3600) ≈ 192.1343 sze. Since 72 sze = 1°, this quantity is approximately 2.669°. The moon's latitude oscillates between about ±6° from the ecliptic through the year, a phenomenon which arises because the orbit of the moon is at a slight tilt relative to the plane of the earth and sun. An eclipse can occur only when the value of column E is approximately 0, i.e. when the moon's orbit intersects the plane of the earth and sun at exactly two times each year. Furthermore, due to precession in the moon's orbit, these points of intersection (called 'nodes') themselves vary along the moon's orbit, rotating diametrically around the orbital path roughly every 18 years (a so-called draconitic period). This irregularity is the reason why a lunar eclipse does not occur every month during the full moon.

The latitude of a given syzygy can easily be determined from the latitude of the previous syzygy and the rates by which the moon's latitude changes across the average syzygy period. In system A the moon's change in latitude is taken to be proportional to the sun's velocity (minus a correction factor for nodal precession), hence it varies between two speeds on the same ecliptic arc as the sun.

In the example text, plus and minus signs in front of the latitudes - again inserted by Neugebauer - indicate which side of the ecliptic, above or below, the moon is at syzygy. A given entry in the column can be computed from the preceding syzygy's latitude, the change in the moon's latitude per syzygy, given by its position on the ecliptic, as well as the retarding factor because of nodal precession. Thus in obv. 1, the moon at syzygy had latitude 3,12;8,39 sze, and was on the arc of the ecliptic were the latitude velocity is 1,58;45,42 sze per syzygy. The nodal retrogression is about 1;33,55°, or 1,13;45,36 sze (matches up?).

This column measures the magnitude of the eclipse at the time of the recorded syzygy (full or new moon).

This gives the velocity of the moon around the time of measurement (longitude?), expressed in degrees per day. The fact that these values fluctuate due to perturbation factors such as the effect of the sun's gravity on the moon during its orbit, and the fact that the moon does not exactly orbit the earth in a circle. Because of this variation, the lunar months can vary in length.

This column gives a first approximation to the length of the lunar month determined by the observed syzygies. It assumes a constant velocity of the sun (that of the faster arc), and is measured in terms of the deficiency from the average length (29 days), marked by the LAL sign. Neubegauer expresses the units in fractional large hours. E.g. in obv. 2 the length of the month Nisan was 29 days minus 0;57,03,45 large hours, or approximately 3 hours, 48 minutes, and 14 seconds.

This column consists lists a correction factor to column G due to the different velocity of the sun along the slower arc of the ecliptic. Because the discontinuity around the jump points in the arc, interpolated values are calculated for the transitional rows.

This column is based on column C, and expresses the difference of sunset times between that on the day of the current syzygy and that of the previous month's. It is given in terms of large hours before or after sunset rather than with respect to noon or midnight. Perhaps these entries were used for precise timing of certain rituals. See Neugebauer pg. 490.

This column is used (in part) to calculate column M. It gives the duration of visibility of the crescent moon on the night of its appearance.